ExcaliberPC, a US-based Asustek reseller, is often the first to offer a new Asus laptop model and that’s again the case this time with the long awaited Asus G74 mobile gaming rig. 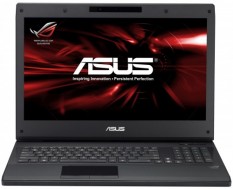 The offered models are the G74SX-A1 and G74SX-3DE. Product specifications says the latter is equipped with a 120Hz 3D screen and Nvidia Vision 3D glasses kit. Both notebooks come pre-configured with 12GB RAM, dual 750GB HDDs spinning at 7,200rpm, and an 8-cell 5200 mAh battery. The A1 has a Blu-ray Combo drive, whereas the 3DE includes Blu-ray burner.

Regarding design, the Asus G74 looks simpler than the previous G73 series. It has a matte chassis, but we weren’t able to find out if the display is non-glossy, which would be a change over the previous version.

The laptop has an isle-style backlight keyboard, a tool-less removable bottom of the case for easy access to HDDs and RAM, and a new cooling system with dual fans.

It provides a 3D Vantage benchmark score of 10,000+ points in benchmark’s Performance mode, according to a comparison chart on the product pages.

The G74SX-A1 and G74SX-3DE run Windows 7 Home Premium and are priced at $1,745 and $1,979, respectively, with backpack and gaming mouse included. The estimated arrival time for both systems is June 28.

The first G74 review is now online. It’s done by Gaming Rig. (John, thanks for the tip.)