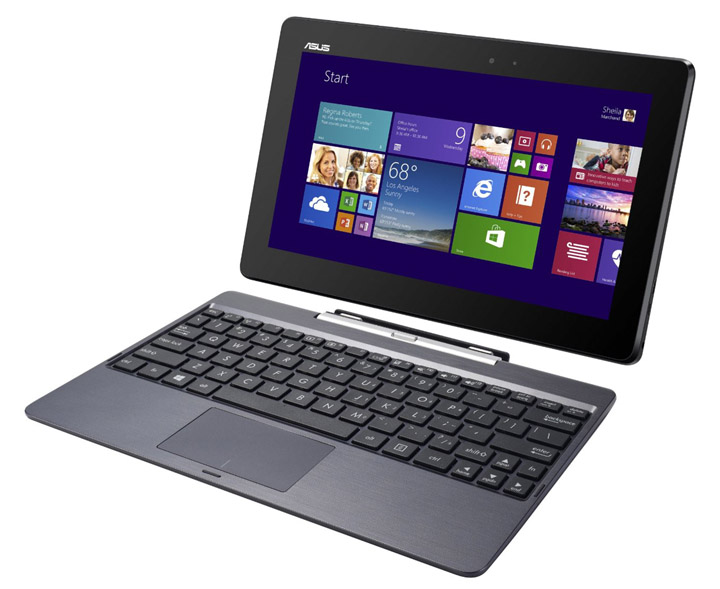 It’s an interesting device today, because Microsoft has rolled out a very attractive Black Friday deal for the T100TA-C1-GR. The item is currently out of stock, but the product page lists an exceptional price of $299, down from $399. This might mean that it’s already sold out, but we’ll check Microsoft.com again to see if it will available for $300. These are great deals not only because of the generally low price for a Windows 8 computer, but also because the T100TA-C1-GR has 64GB of internal solid state drive-based storage, instead of 32GB on the T100TA-B1-GR model which retails for about $350. This is especially important because of a large footprint of Windows 8 (in comparison to Android or iOS), which leaves only 8GB out of 32GB of available space for users’ files on the B1-GR. The T100TA-C1-GR provides much better 40GB of usable storage space.

If you’re not familiar with the Asus Transformer Book T100-series, it’s important to note that it’s a laptop and a tablet at the same time, enabling users to detach the screen from the keyboard and use it as a classic standalone slate. It’s a budget-class device made of grey glossy plastics. Inside the tablet portion, which weighs 1.2 pounds and measures 0.4 inch in profile (2.4lbs / 0.9” with the keyboard), there’s the Intel Atom Bay Trail-T Z3740 Quad Core processor. It’s designed with power efficiency and cool operation in mind and has enabled a very long battery life on the T100 by Windows PC standards: up to 11 hours. As a downfall, performance is satisfactory only for the basic web and office tasks, plus multimedia playback. Multitasking is also limited since the device has only 2GB of RAM memory.

In the software department, T100TA has a big advantage over Windows 8 RT-based tablets, such as the latest Microsoft Surface and Nokia 2520, because Atom processors support classic Windows 8 applications, alongside Metro-style apps.

A big plus for all three devices is inclusion of Microsoft Office Home & Student 2013 suites for free.

Other features on the tablet part of the T100TA-C1-GR include a 1.2MP front camera, stereo speakers, micro USB, micro HDMI video out, and microSD card reader. Wireless connections include Wi-Fi and Bluetooth. Besides the keyboard, the dock additionally provides a USB 3.0 port, but has no built-in extra battery like some higher end tablets such as the HP Split X2 or Toshiba Click.

But, they aren’t quite comparable to the Transformer Book T100, because they’re more than $500.