The Intel Pentium 3805U certainly isn’t the most important member of the latest Intel Broadwell processor family. The star of the Broadwell show is the Core i5-5200U, since it’s the typical mid-range chip used in so many notebook models. On the other hand, the entry-level Pentium 3805U is available only in select low-end laptops such as the Dell Inspiron 3543 and others. 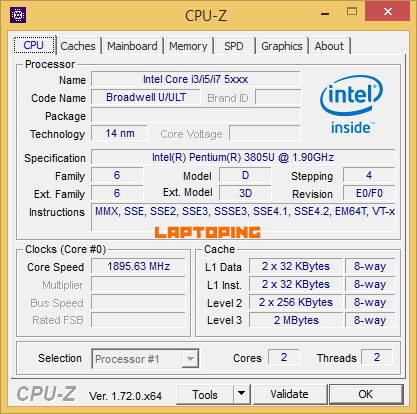 The 3850U shares many of its characteristics with the faster i3, i5, and i7 Core parts from the same Broadwell-U lineup, but also lacks some crucial features. All models with U suffix are dual-core chips with a power consumption of 15 Watts. The Pentium lacks HyperThreading technology, so it won’t utilize multi-threaded software as good as the HT-enabled i3, i5, and i7. Furthermore, the 3805U doesn’t support TurboBoost found on the i5 and i7, so it isn’t capable of rapid increases of the clock speed during certain CPU usage spikes. The last but not least, the reviewed chip comes with slower integrated graphics. It has the Intel HD GT1 series graphics processor instead of the better Intel HD 5500U (GT2).

These minuses, lower clock speed, and smaller cache size result in a weaker benchmark score of the Pentium in comparison with the Core series. But, it’s still noticeably better than the frequently used Intel Celeron N2830 / N2840 and AMD E1-6010, found in the cheapest notebook PCs on the market. 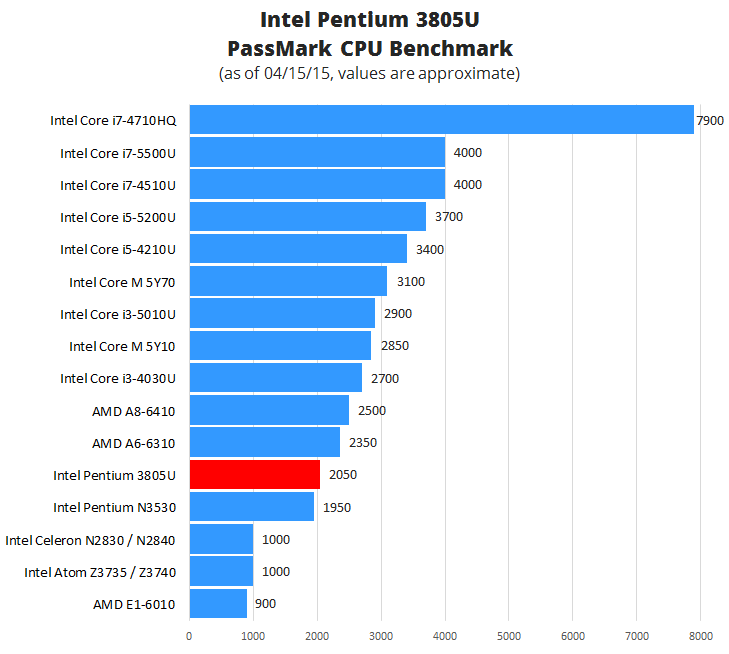 Real World Use of Intel Pentium 3805U

For the real world-use test of the Pentium 3805U, we used one of the Dell Inspiron 3543 laptop configurations. Besides the reviewed processor, it has 4GB of RAM. As for storage, we put a solid state drive in it, to avoid sluggishness of the included 500GB traditional hard disk at 5,400 rpm and its negative effect on the test. Operating system is Windows 8.1.

Our conclusion is that the 3805U is almost literally twice slower than the mid-range i5-5200U from the same Broadwell-U family. Thankfully, the difference is almost unnoticeable in usual day-to-day tasks, such as web surfing, basic work in Word and Excel, .pdf document reading, and 1080p multimedia playback. If these are the sole purpose of your laptop use and you’re on a budget, the cheaper Pentium is the way to go. But, when you put the CPU under photo editing and video editing stresses, the difference in comparison to the i5 is huge. For instance, applying a blur effect on a high-resolution image, as shown in the video below, on the Pentium lasted around 10 seconds, while the i5 finished the task in around 5 seconds. Similarly, rendering a 1.5-minute 1080p 25bps video on the Pentium lasted almost 3 minutes as opposed to 1.5 minutes with the i5. Therefore, if you’re into photography and videography, it’s worth paying more for the Core i5 or i7.

Gaming on Intel Pentium 3805U Broadwell with Intel HD Graphics

The 3805U simply isn’t a good solution for gaming. Its Intel HD (GT1) integrated graphics isn’t too bad. But, the CPU itself is a bottleneck for many games. For instance, it causes severe frame rate drops in games such as FIFA 15 and Battlefield 4. The Intel HD GPU itself looked like it can handle these titles on low settings, but as soon as the CPU usage spikes (up to 100% in some games), they become unplayable. The same problem occasionally appeared in Minecraft, too. Some less CPU-demanding titles run fine. You can have a reasonably good gameplay in League of Legends, Dota 2, and Counter Strike Global Offensive for instance.

As for temperatures, it can be said the 3805U runs cool. During high processor loads of almost 100 percent, the CPU temperature was about 50 degrees Celsius. Fan of the Inspiron 3543 was really quiet even under highest CPU loads.

Specifications of the Intel Pentium 3805U

Here's the specs sheet of the Intel Pentium 3805U:

User reviews and Q&A on the Intel Pentium 3805U