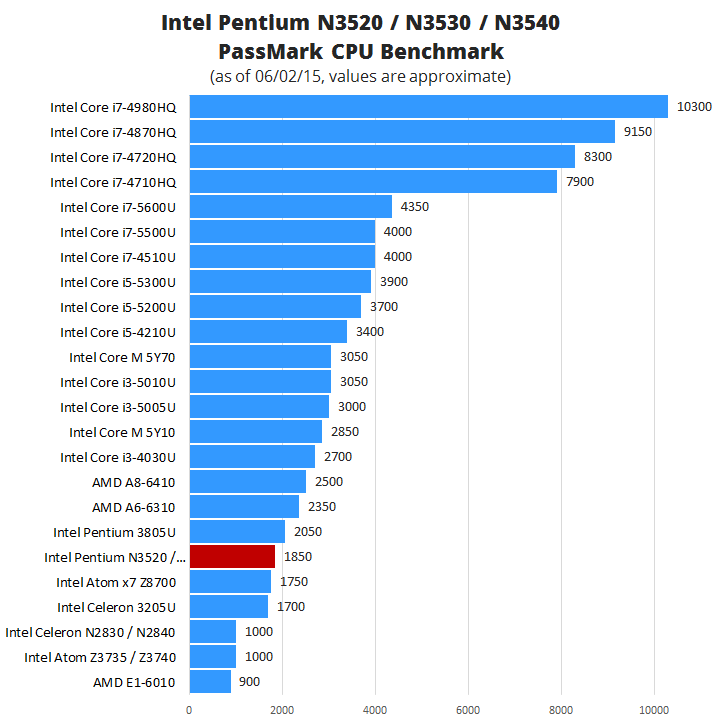 These quad-core Bay Trail Pentium CPUs deliver noticeably better computing speed than the lower-end dual-core Bay Trail N28xx-series Celerons, while consuming the same amount of power of 7.5 Watts. The reviewed Pentiums are also faster than the popular tablet-use quad-core Z37xx Bay Trail Atoms, but the latter consume only 2-2.2W. Another positive fact in favor of the Pentium N-series is that it’s only slightly slower than the 15-Watt Pentium 3805U Broadwell dual-core.

Differences between the N3520, N3530, and N3540 are minor and are related only to clock speeds. They all share the same base CPU clock speed of 2.16GHz, but in “burst” mode they can achieve up to 2.42, 2.58, and 2.66 GHz, respectively. Furthermore, the Intel HD graphics integrated in these processors has a base clock speed of 313 MHz, but their maximal dynamic frequency or burst frequency is different. The N3520 runs at up to 854MHz, while the N3530 and N3540 run at up to 896 MHz. These differences in the real world use are minor. The rest of the specifications is identical. The 64-bit quad-core CPUs based on 22-nanometer production technology have 2MB of cache, support for up to 1333MHz RAM speed, and support for VT-x virtualization. 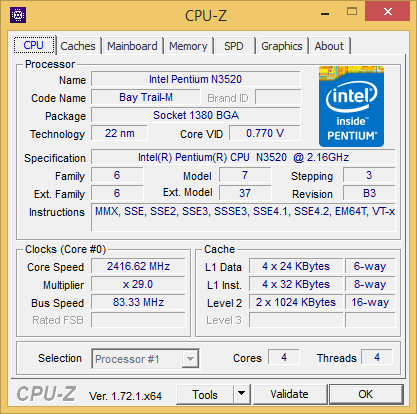 For this real world-use test of the Intel Pentium N-series Bay Trail processors we used an HP Pavilion x360 11 convertible notebook with the Pentium N3520. As already mentioned, the N3530 and N3540 are only slightly faster, which can’t be noticed during your daily computing tasks or gaming. Alongside the N3520, the tested Pavilion x360 11 had 4GB of system memory at 1,333MHz which is enough for moderate multitasking and a slow 500GB hard drive spinning at 5,400 rounds per minute.

What are the Pentium N35xx chips good for? In short, for web surfing, multimedia playback, office document editing, and casual gaming. You can even use them for high-resolution photography and 1080p video editing, although some operations (applying image filters, video transcoding) in these tasks take noticeably longer time to complete than with the mainstream Intel CPUs like the i5-5200U. Webpage scrolling, tab switching, and zooming in Google Chrome worked flawlessly on the tested system. You can also play high-resolution YouTube videos (including 4K) without a glitch. Work in Microsoft Word and Excel programs was very fluid. Take a look yourself:

As expected, you won’t be able to play the latest hardware-demanding blockbuster game titles. But, casual games and lighter MMORPGs and first person shooters run acceptably good. For instance, you can play League of Legends and Counter Strike: Global Offensive on low settings and 720p resolution at around 30 frames per second. Dota 2 MMORPG runs mostly between 20 and 25 fps, with occasional drops in intensive scenes to around 15 fps. Minecraft runs well on low settings, at a speed of around 30 fps. FIFA 15 soccer is too heavy for the chips. You can’t get more than 15 fps consistently with them on lowest FIFA 15 detail settings and 720p. We also tested Skyrim, which scores around 15 fps with the same settings.

The Pentium N Bay Trail has an excellent thermal design. In the tested HP x360 11 laptop, temperatures never exceeded 51 degrees Celsius, even under 100% CPU load during benchmarks. All that with very low fan noise. On idle, CPU temp was 41 degrees.

Note: The benchmark scores of the listed processors are averages measured across various devices with these processors. The scores and real-world performance of the Intel Pentium N3520 / N3530 / N3540 and compared CPUs may vary depending on the notebooks' other components, settings, cooling, and other factors. However, the benchmark results are good indicators of the processors' performance.