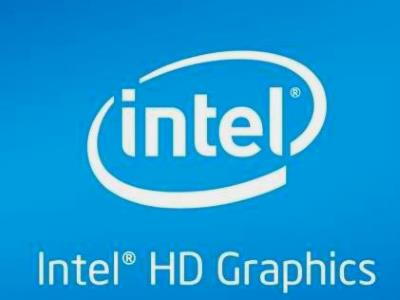 The Intel HD 5500 is the most important graphics processing unit for laptops in 2015. Although it isn’t a high-performance one, the Intel HD 5500 is probably the widest adopted GPU for mobile PCs on the current market, since it is integrated in the popular Intel Core series processors. Precisely, the 5th Generation Intel Core Broadwell CPUs, such as the i3-5005U / i3-5010U, i5-5200U / 5300U, and i7-5500U / 5600U. These chips are used in numerous mainstream, thin-and-light, and business-class laptops, which are primarily designed with everyday home and office computing in mind, rather than high-performance for demanding games and other intensive tasks. Laptops with Broadwell processors currently start at around $500. 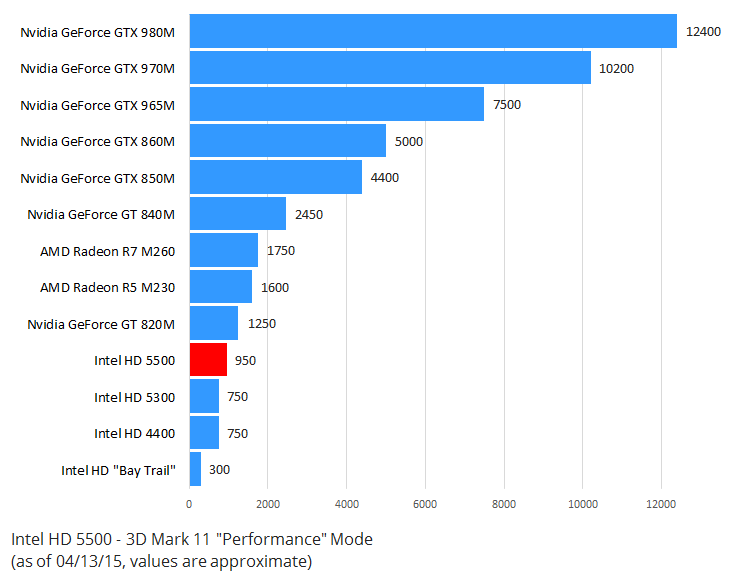 For this test, we used an Acer Aspire E5 laptop with the mid-range Intel Core i5-5200U chip which contains the reviewed graphics processor, 4GB of RAM (for Call of Duty Advanced Warfare test we had to upgrade to 8GB), Windows 8.1 operating system, and the latest Intel HD graphics drivers installed. For gameplay recording we used a dedicated video capture card, so there are no slowdowns in games due to software-based capturing. It’s worth noting gameplays are slightly slower and faster on the i3 and i7 Broadwell chips with the HD 5500, due to differences in raw CPU power. Another important factor is whether you have single-channel or dual-channel system memory setup, where dual-channel (i.e. 2x4GB instead of 1x8GB) setups can give noticeably better benchmark results and gaming experience. Also, different notebook designs and their cooling systems, as well as BIOS settings, can influence graphics performance. The laptop we tested appears to deliver somewhat lower results than other systems with the same core specs.

League of Legends, the most played online PC game, runs without a glitch on “Medium High” settings at 1080p 1920×1080 resolution, with character, effect, and environment graphics quality set on High, shadows set to Medium, and anti-aliasing turned off. In-game performance is between 35 and 40 frames per second most of the time. The final result is a very smooth gameplay.

Another important MMORPG title with large players’ base is DOTA 2. It is more demanding in terms of hardware for smooth gameplay than League of Legends, so you have to dial down settings quite a bit. The best DOTA 2 experience on Intel’s HD 5500 appears to be with resolution set to 720p (1280×720), shadow and texture quality on “Medium”, and advanced graphics features turned off. The settings result in frame rates of around 40 fps. Default DOTA 2 settings for the GPU at 720p include anti-aliasing and other features turned on and shadows and textures set to “High”. But, the frame rates drop to 25-30 fps in that case.

Minecraft is among the top titles on popular PC games charts for years. On the reviewed GPU, it runs very smooth on “Fancy” (high) settings, with fps values gravitating toward 35 fps. If you set Minecraft graphics to “Fast” (low), frame rates will reach above 40 fps.

World’s most popular first person shooter – Counter Strike: Global Offensive – can be played decently smooth on the GPU. For instance, one of the optimal graphics detail setups includes resolution set to 720p, “Medium” details, and anti-aliasing turned off. Frame rates are around 35-45 fps with the setup.

Battlefield 4 first person shooter requires a good video card and processor in order to run decently. On the HD 5500, you’ll have to put the in-game graphics settings to minimum and set the resolution to 720p. The result is a merely playable experience, with fps varying between 20 and 25 fps.

The recently released Call of Duty: Advanced Warfare from the same genre needs a beefy computer to enable smooth gameplay. Unfortunately, the game felt choppy on the reviewed GPU, with fps oftentimes hitting below 20 mark, although all details and resolution were set to low. For this game we had to upgrade RAM to 8GB (other games were tested with 4GB). The game itself consumes nearly 4GB, plus you need memory for operating system and integrated graphics.

In Skyrim, the Intel HD 5500 performs better. You can run it reasonably well only on the lowest settings and 720p, but gameplay is pretty much smooth on these settings. FPS values are close to 30.

For FIFA fans, it’s worth noting the latest release – FIFA 15 – can be played on Intel’s integrated GPU, but only at minimal settings. At 720p, graphics quality set to low, and anti-aliasing turned off.

Full HD and Ultra HD (4K) video playback was a piece of cake for the tested system. CPU utilization increased only around 2 percent during playbacks of a YouTube video in Internet Explorer in 1080p (FHD) and 2160p (4K), while GPU utilization was ~10% and 15%, respectively. Of course, the playbacks were completely fluid.

Although it isn’t designed nor advertised to be a gaming graphics processor, the Intel HD 5500 is able to satisfy the casual gamer. It supports high-resolution video playbacks, including 4K, without a glitch. Gameplays are much better than on the Intel HD series found on the budget Celeron and Atom “Bay Trail” processors. The GPU is also faster than its precursor – the Intel HD 4400 of the 4th Gen Intel Core “Haswell”. But, the HD 5500 isn’t even nearly as fast as the available lower-mid-range dedicated video cards for laptops, such as the Nvidia GeForce GT 840M. 3D Mark 11 benchmark results confirm that. On the positive side, if you go for a notebook with the HD 5500 only you will avoid extra costs, greater power consumption, and higher temperatures associated with laptop models with dedicated GPUs.

Note: The benchmark scores of the listed graphics processors are averages measured across various devices with these processors. The scores and real-world performance of the Intel HD 5500 and compared GPUs may vary depending on the notebooks' other components, settings, cooling, and other factors (especially single-channel vs faster dual-channel RAM and speed of the main processor). However, the benchmark results, as well as gameplay videos, are good indicators of the graphics processors' performance.

Specifications of the Intel HD 5500

Here are the most important specs of the Intel HD 5500: