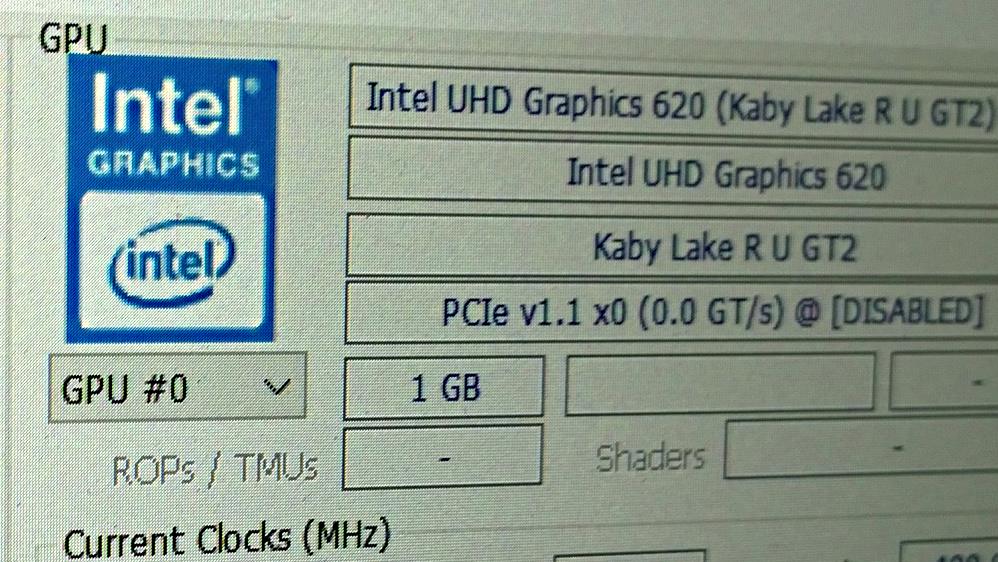 The Intel UHD 620 Graphics is used in the widely adopted 8th Generation Intel Core U-series laptop processors. Specs-wise, the Intel UHD 620 is nearly identical to the previous HD 620 of the 7th Gen Core U. The new version has only 100 MHz higher clock speed as the main difference. Both of these basic integrated graphics processors are suitable for some entry-level casual gaming and multimedia, including Ultra High-Definition videos.

However, our test of the UHD 620 integrated in the popular 8th Gen Intel Core i5-8250U quad-core processor showed some noticeable performance improvements in some games when compared to our previous test of the i5-7200U dual-core / HD 620. In particular, in DOTA 2, GTA 5, and FIFA 2018. These improvements are rather a result of faster performance of the 8th Gen Core CPUs in general and other factors (like faster RAM, more optimized software and drivers) than speed of the graphics processor itself.

As a side note, the UHD 620 can be found in other 8th Gen chips, such as the i7-8550U. It’s marginally faster than the i5-8250U. Graphics performance of both is very similar, with a slight advantage of the i7 variant.

Note: This review is written simply, to make it easily understood by the average home & office user. If you need some of the more technical details of the test, feel free to ask for that in the Q & A section of this page.

Here’s the User Benchmark ranking of the UHD 620 compared to other popular notebook GPUs:

Please keep in mind that the results displayed in the chart are approximate averages across various laptop models. Graphics performance can vary depending on a laptop, its processor, RAM, and other factors. But generally, these benchmark results are good indicators of performance differences between the tested GPUs.

Our selection of PC games for this review includes some of the most popular titles at the time of this writing – League of Legends, Dota 2, Minecraft, Counter Strike – Global Offensive, GTA 5, FIFA 2018, Fortnite, and Realm Royale. Most of these are non-demanding games, usually played on laptops with basic integrated graphics processors. Playing the latest blockbuster titles with spectacular graphics requires a laptop with a full-blown dedicated video card.

DOTA 2 is a similar game, but with higher hardware demands. The optimal settings appear to be HD (1280×720 or similar) resolution and lower-mid game rendering quality. In that case, frame rates are between smooth 50 and 80 fps. If you want to have above 50 fps on Full HD resolution, you have to put rendering quality on the lowest settings.

As a CPU-dependent game, it looks like DOTA 2 takes advantage of the new 8th Gen Intel Core chips. On the previous 7th Gen Core with HD 620 graphics, we had for instance to use the lowest settings and HD for frame rates above 50 fps.

As for Minecraft, the Intel UHD 620 can easily crunch it with very high frame rates, hoovering around 100 fps. And all that with graphics details set to maximum (and default rendering distance of 12 chunks).

The traditionally most popular first person shooter game Counter Strike – Global Offensive ran very well on the tested laptop. With resolution set to HD 1280×720 and graphics on high, frame rates were mostly between 50 and 70 fps, resulting in a smooth gameplay. For smoothness on higher Full HD 1920×1080 resolution, you have to dial down graphics settings to medium. With that configuration, you can get a gameplay with mostly between 40 and 50 fps, which is again decently smooth. Improving graphics detail quality with anti-aliasing will degrade frame rates up to 50 percent.

GTA 5 is another game which saw noticeable improvement from 7th Gen / HD 620 to 8th Gen / UHD 620 update. We can’t definitely tell what enabled higher frame rates we achieved in this review in comparison to our review of the previous generation. But on a laptop with the i5-8250U and UHD 620, you can expect GTA 5 to be playable (versus previously barely playable). GTA 5 is a demanding game for the mainstream non-gaming laptops. On UHD 620, GTA 5 requires all settings to be on the lowest and low HD resolution for playable experience of 25-30 fps (and even well above 30 fps in some parts of the game).

Another game that works noticeably better on the 8th Gen Intel i5 / UHD 620 than on 7th Gen Intel i5 / HD 620 is FIFA soccer simulation. The latest FIFA 2018 can be played reasonably smooth on the lowest settings and HD resolution, with frame rates around 40 fps most of the time. That’s better than around 30 fps on the older i5 / HD 620.

Fortnite: Battle Royale is a big hit and currently one of the most popular “sandbox survival” games. We tested Fortnite: Battle Royale and found that you can play the game on the UHD 620 if you use lowest graphics detail settings and 1280×720 resolution. Frame rates vary greatly depending on a scene, ranging from around 30 – 50 fps. If you put detail settings on medium, frame rates drop to around 20-30 fps. Still playable, but choppy.

Realm Royale is an emerging game similar to Fortnite: Battle Royale, but it is more laptop-friendly. On the lowest settings (named “High” in the game) and 720p, the UHD 620 can achieve smooth gameplay at around 60fps. You can also put it on high “Maximum” settings and still have a fluid ~40-50 fps gameplay. The game is even playable on “Maximum” and 1080p resolution (around 30-40 fps), but turning anti-aliasing on severely reduces frame rates on all settings.

As you can see, the Intel UHD 620 can play very well many of the most popular games. Sure, a dedicated video card is still needed for fluid playing of the latest hardware demanding titles with graphics quality set on high. But, the UHD 620 which is embedded in every 8th Gen Intel Core U processor doesn’t increase overall price of a laptop, doesn’t produce excessive heat, and doesn’t consume battery much, as opposed to dedicated video cards.

Note: The benchmark scores of the listed graphics processors are averages measured across various devices with these processors. The scores and real-world performance of the Intel UHD 620 and compared GPUs may vary depending on the notebooks' other components, settings, cooling, and other factors (especially single-channel vs faster dual-channel RAM and speed of the main processor). However, the benchmark results, as well as gameplay videos, are good indicators of the graphics processors' performance.

Specifications of the Intel UHD 620

Here are the most important specs of the Intel UHD 620:

User Reviews, Q&A, and Videos on the Intel UHD 620