The Nvidia GeForce 940M is a lower-mid-range dedicated video card, aimed to boost graphics capabilities of the mainstream non-gaming laptops. Many of these notebooks come with just basic integrated graphics good for only casual and totally non-demanding games. The GeForce 940M makes many of the demanding blockbuster titles playable on these machines, after you lower graphics detail settings and resolution. In addition, the dedicated GPU improves performance of some programs, primarily video editing and photography editing software with support for graphics acceleration.

As a side-note, the widely adopted GeForce 940MX performs very similar to the 940M and is only slightly faster. 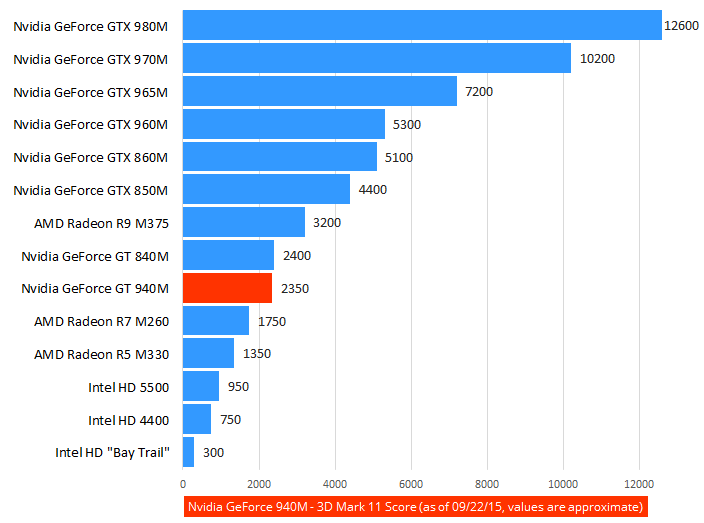 YouTube lists many 940M gameplay videos by various users with different laptop configurations. For instance, GTA 5 is playable on mostly high settings and 1366×768 resolution, with frame rates above 30fps. The same applies to Battlefield 4.

Note: Performance and benchmark scores of the Nvidia GeForce 940M may vary depending on factors such as the notebook's other components (especially single-channel vs faster dual-channel RAM). However, benchmark results and gameplay videos are good indicators of its performance.

Specifications of the Nvidia GeForce 940M

Here's the specs sheet of the Nvidia GeForce 940M:

User reviews, Q&A, and videos on the Nvidia GeForce 940M

Leave a Review Ask a Question Post a Gameplay Video