The Nvidia GeForce GTX 1080 is currently the most powerful video card for laptops. This GPU can easily crunch all the latest hardware-demanding games, thanks to fast and power-efficient Nvidia Pascal architecture and robust specifications. With specs being only slightly weaker than on the desktop PC-use GeForce GTX 1080, the laptop version of the same GPU can truly enable gaming performance of full-blown desktop gaming rigs in the notebook form factor.

It’s worth noting that there’s also a Max Q version of the GTX 1080. Max Q variants of the GeForce GPUs are more power efficient and run cooler at expense of weaker graphics processing power. By how much depends on a GPU configuration of a particular laptop model. But, most laptops with the GTX 1080 have a full-blown version of the card. 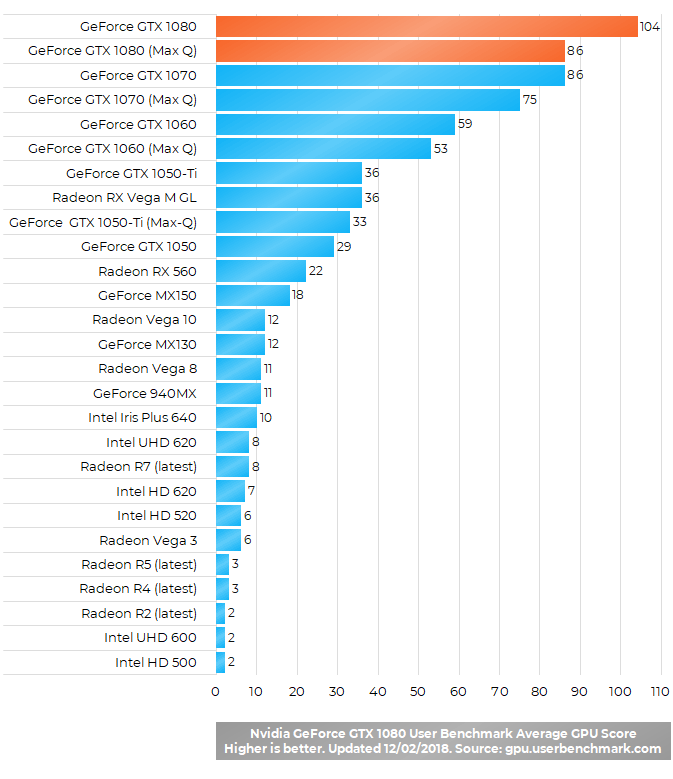 Real-world gameplays show that all popular AAA titles run flawlessly on this GPU on highest graphics detail settings. In fact, the GTX 1080 can be considered to be an “overkill” for many games, but it is needed if you wan’t to play on very high display resolutions like Quad HD or Ultra HD or on multi-monitor setups.

Note: The benchmark scores of the listed graphics processors are averages measured across various devices with these processors. The scores and real-world performance of the Nvidia GeForce GTX 1080 and compared GPUs may vary depending on the notebooks' other components, settings, cooling, and other factors (especially single-channel vs faster dual-channel RAM and speed of the main processor). However, the benchmark results, as well as gameplay videos, are good indicators of the graphics processors' performance.

Specifications of the Nvidia GeForce GTX 1080

Here's the specs sheet of the Nvidia GeForce GTX 1080:

User Reviews, Q&A, and Videos on the Nvidia GeForce GTX 1080