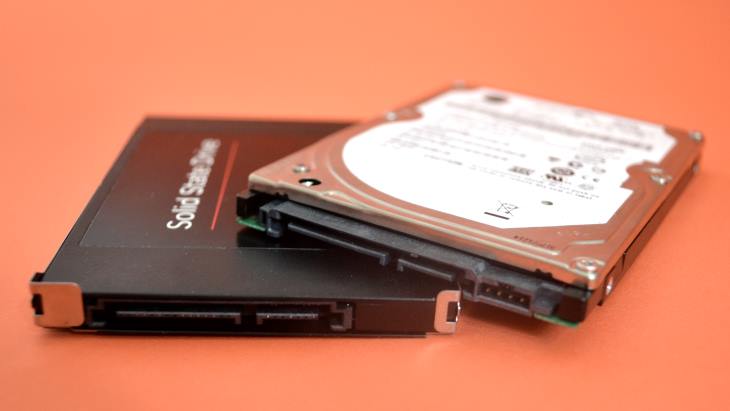 When buying a new laptop, 2-in-1, or tablet PC, its data storage capabilities are among the most important factors for your purchase decision. Your choice of internal data storage device will depend on performance and cost, but also on your storage capacity needs. In this article, we will explain the main differences between four storage types you can find in modern Windows-based laptops and other portable PCs – hard disk drives (HDD), solid state drives (SSD), hybrids (HHDD / SSHD), and eMMC storage. The article also contains a table of required space by various software and common user document and media files, so you can sum them up and calculate how much space you actually need.

Hard disk drives or HDDs are traditional storage devices for personal computers. You can find them in the vast majority of notebooks, especially inexpensive ones. They are based on rotating magnetic platters and reading heads. HDDs are the slowest kind of storage in modern PCs. In today’s era of fast processors and large system memory amounts, hard drive is oftentimes a system performance bottleneck. In comparison to solid state drives, hybrid drives, and eMMC storage, they’re characterized by longer system boot-up times, slower application and file loading, and slower file copy / paste command execution. On the positive side, HDD is the cheapest kind of storage.

Rotational speed of platters of 5,400 rounds-per-minute is the standard one for laptop-use hard drives. HDDs in select notebooks spin at 7,200 rpm, making read / write speeds and access to data somewhat quicker. However, 7,200 rpm HDDs for laptops are a rarity on the market and don’t improve overall performance much. Besides rotational speed, size of an HDD’s cache memory which is usually either 8 or 16MB, also affects performance.

Laptop hard drives come in the 2.5-inch form factor and are connected to the rest of the PC systems via the SATA III interface, which replaced SATA II years ago.

Since hard disk drives are mechanical devices and notebooks are meant to be carried around, manufacturers have to use enhanced HDD shock protection technologies to prevent data loses caused by accidental drops.

The most common hard drive capacity in today’s laptops is 1 Terabyte (TB) or 1,000 Gigabytes (GB). Many of the cheap laptops come with a smaller 500 GB hard drive, while 2 TB size is occasionally used in some more expensive notebooks.

Solid state drive-based storage is newer technology than the decades old hard drive storage. SSDs have no moving parts, since data is stored on Flash memory-based modules. Performance of different SSD models varies, but all available on the market are significantly faster than any laptop hard drive. For performance comparison of HDDs and SSDs, which are the most common types of storage in laptops on the market today, you can check out this test. Other advantages of solid state storage versus hard drives are completely silent operation, lower power consumption, and lower chances of data loss due to accidental drops.

SSDs in the latest notebooks come in two form factors:

While almost all notebooks have a 2.5″ storage bay, those supporting only M.2 format are select thin-and-light computers.

A relatively new technology on the storage market is NVMe. It enables extremely fast operation of NVMe-compatible M.2 solid state drives in laptops with NVMe support. In day-to-day home and office tasks, you probably wouldn’t notice NVMe speed boost over non-NVMe M.2 and 2.5″ SSDs. But NVMe will show its potential in some storage-intensive scenarios like copying a large number of files or editing large high-def videos.

On the negative side, common capacities of solid state drives are generally smaller than capacities of mechanical hard drives. SSDs vary between 128 GB and 1 Terabyte and have a noticeably higher price per Gigabyte than hard drives.

Laptop-use hybrid hard disk drives (HHDD), also known as solid state hybrid drives (SSHDs), combine hard drive and solid state storage in a single 2.5″ device. They aren’t as widely adopted as pure HDDs and SSDs. Hybrid drives have all parts you can find in a classic HDD and include an SSD module on top of them. It’s hard to compare raw performance of HHDDs / SSHDs to HDDs, SSDs, and eMMC, because hybrids don’t load every stored file and installed program at a same speed. They boost loading only of software and files selected by their caching algorithms, based on your common computer usage scenarios. Software and files you most frequently use, including those required for booting up the operating system itself, are stored on the SSD portion for faster loading. Accessing the rest of the data stored on the HDD portion isn’t quicker than on comparable pure HDDs.

Common capacities of laptop-use hybrid storage devices are 500GB and 1TB on the hard disk platters, plus either 8GB, 16GB or 32GB of SSD memory.

Embedded Multimedia Card or eMMC is more affordable and slower Flash-based storage than solid state drives. eMMC is usually found in smartphones and other consumer electronics devices, but it’s used in personal computers, too. In everyday use, performance of eMMC storage is somewhere between speed of HDDs and SSDs. In the PC segment, you can find eMMC soldered onto motherboards of some budget-class notebooks, tablet PCs, and 2-in-1 computers.

eMMC capacity provided by these PCs is either 32GB or 64GB, rarely 128GB. These are quite limited capacities by today’s standards. To make things easier, most of the eMMC-equipped laptops have a memory card slot in which you can insert a memory card (SD or microSD) to expand internal storage capacity. In addition, computer makers often bundle eMMC-based computers with free access to storage on a remote server, popularly known as cloud storage.

As same as SSDs, eMMCs are power-efficient and completely quiet.

How Much Storage Space You Need

Here’s a list of storage space required by Windows operating system, some popular software and game titles, and common users’ files such as movies, songs, and documents.

*Values in the table are approximate.

You should keep in mind that some Windows features such as Windows Update and System Restore, as well as drivers for your hardware, require additional space. Also, manufacturers usually dedicate a portion of storage space to files needed for system recovery, therefore shrinking available space for users’ files and programs.