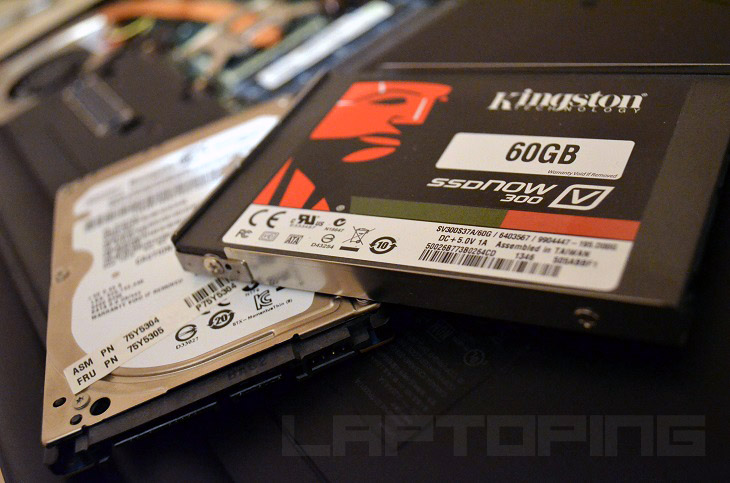 If you haven’t upgraded your laptop’s hard drive to a solid state drive yet, this quick comparison between the two will show you what you’re missing performance-wise, but also downfalls (actually a single downfall) of the newer generation of storage.

There’s no doubt that any SSD you can find on the market today as a traditional hard drive replacement will save you lots of precious time when copying files, loading games, or waiting the system to boot up. Even the budget Kingston SSDNow V300 Series SSD we used in our test will make significant difference, not only in benchmarks but also in the real life use.

We’ve put the Kingston V300 with 60GB capacity, which sells for about $60 at the time of this writing, against a Seagate Momentus 320GB hard drive at 5,400rpm. For this test, we’ve used an old Lenovo ThinkPad L520 (2012 model) laptop with an Intel Pentium processor and 4GB of RAM. Basically, this was a storage upgrade of the L520, although capacity actually decreased more than 5 times.

That’s obviously the biggest drawback of switching to SSD tech. Its pricing is still high in comparison to mechanical storage, despite significant price drops of the former in recent years. For instance the 480GB Kingston V300 is almost $300, while a 500GB 5,400rpm 2.5″ laptop HDD can be found for as low as $50, still cheaper than the 60GB V300. Some users, especially those who primarily use cloud storage for their files and online video streaming services instead of locally stored video files, are fine with having such a constrained local storage. On the other hand, those who want to keep their movie and music libraries on laptops probably won’t be happy with only about 45GB of space when you exclude Windows installation on the drive. For some gamers, relying on smallish solid state storage is virtually impossible. Take the latest game Titanfall for example. The official system requirement for its installation is 48GB of free storage space.

And that’s pretty much it when it comes to disadvantages of SSDs. Besides completely silent operation and a couple of tens of minutes longer battery life, SSDs deliver surprisingly big performance boost in the eyes of those who haven’t tried out one of these drives yet.

Copying of a 1.5GB folder containing hundreds of files of various sizes on the hard drive took 1 minute and 5 seconds, while on the SSD it took more than a half less – only 27 seconds.

Compression of the same folder to a .zip file took 2 mins and 21 secs on the HDD and 1 min and 55 secs on the SSD. The difference here is smaller since compression process largely depends on the processor, while storage speed helps a bit.

In another file operation test which primarily relies on the CPU, conversion of a 100MB .mov 1080p file recorded with a DSLR camera to a .wmv file with the same resolution and 50% reduced bit rate was almost equal on both storage devices: 2 mins 25 secs and 2 mins 20 secs, respectively.

Lading of the first campaign level of Crysis game is almost twice faster on the SSD. It took 23 seconds, down from 45.

Another test where solid state storage shined is system boot-up. Time elapsed from the power button push to Windows 8.1 log-in screen on the hard disk was 35 seconds, while on the solid state drive it was only 14 secs. From the log-in to fully loaded Windows Metro interface it took another 8 seconds on the HDD and 3 seconds on the SSD.

Here’s a breakdown of the test:

To remind you, this is not a test of the Kingston V300 itself, but rather a general comparison of common budget-class SSD and traditional HDD laptop storage you can find on the market today. Other comparable products may give different results, but generally performance difference ratio should be similar.