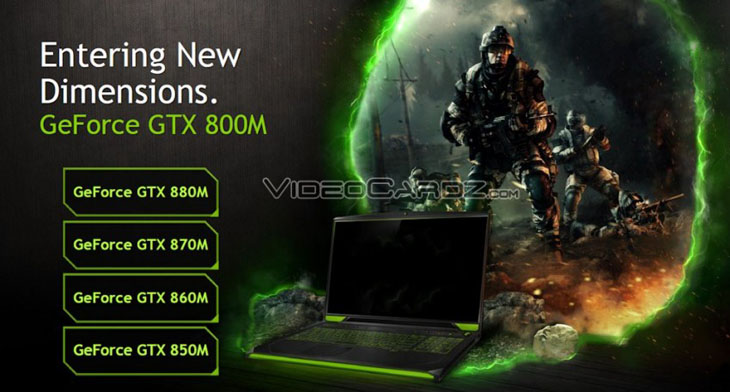 Nvidia has released the GeForce 800M series laptop video cards, including models based on the latest generation Maxwell architecture which brings some significant performance and energy efficiency improvements.

Among the announced SKUs, the high-end parts are the GeForce GTX 880M and GTX 870M, which are unfortunately still based on the previous Kepler architecture. The 256-bit GTX 880M with 1536 CUDA cores is just a tweaked GTX 780M with slightly higher clock speed and 8GB DDR5 video memory option instead of maximal 4GB. As a result, the new model is 15% faster than the previous-gen counterpart, according to Nvidia. The GTX 870M isn’t a rebrand of the 770M, but rather a crippled 880M variant. Both the 770M and 870M have a 192-bit memory interface, but the latter sports 1344 cores instead of 960 and comes with up to 6GB of video memory instead of 3GB. Speed improvement in this case is “30%”.

Although they belong to the mid-range gaming-class offering, the 128-bit GTX 860M and GTX 850M are actually big news, since they’re the first Maxwell-based video cards for laptop computers. They have 640 and 512 CUDA cores and are claimed to be 40% and %60 faster than the old versions while consuming less power. Both the GTX 860M and 850M have 2GB of GDDR5 video memory.

These two appear to be the sweet spot for inexpensive 2014 gaming laptops, such as the upcoming Lenovo IdeaPad Y50 / Y40 series. The GTX 880M and 870M will be included in the full-blown mobile gaming rigs such as the Alienware 17 and 18, Asus ROG G750, and MSI GT70.

The GeForce 800M lineup will also include the 840M and 830M video cards for the mainstream notebooks. They’re 64-bit parts and are 35% and 25% faster than their 700M precursors.

The lineup supports the new Battery Boost technology allowing users to set a frame rate limitation in order to conserve battery juice, and ShadowPlay for capturing gameplays in a background process.