The 15.6-inch Toshiba Satellite C55-A5300 is currently one of the cheapest Windows 8 notebooks in the market. To hit the affordable $280 price point, Toshiba had to make a few concessions. Besides budget-looking chassis made of plastics, computing speed is low. 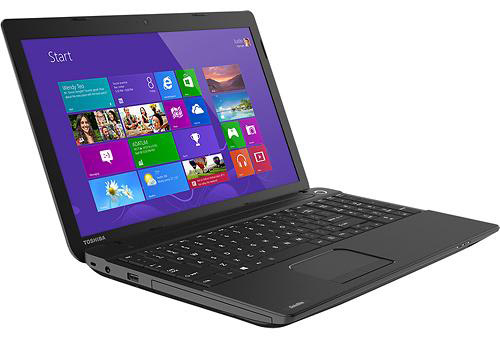 Performance shortcomings come from reliance on the low-end Intel Celeron 1037U processor. It is decidedly weak in comparison to other CPUs commonly found in sub $500 laptops, like the i3-3120M. The 1037U is incapable of completing some complex tasks like video editing at an acceptable speed. On the positive side, it’s still fairly usable for daily web browsing and light productivity and is much faster than frequently used AMD low-end chips in the sub-$300 notebooks. Also, the chip runs cool and is power efficient thanks to its Thermal Design Power of 17W. For comparison the i3-3120M uses 35W. In terms of RAM and storage, the Toshiba C55-A5300 doesn’t lag behind the competition, since it has standard capacities of 4GB and 500GB, respectively. For more data storage, it also provides a DVD burner. You can, of course, connect USB external drives to the laptop, but unfortunately, USB 3.0 standard is not supported, meaning that input/output will be at slower USB 2.0 speed.

The display resolution is 1,366-by-768 pixels, which is an expected one for a budget-class system. If you want more real estate on your Windows Desktop and to watch movies in better clarity, you’ll have to get a 1080p full HD laptop and shell out more than $600.

For sound, the C55-A5300 provides a pair of built-in speakers and DTS Sound technology, while for video chat services like Skype it has a 720p web camera. Networking is enabled either via Wi-Fi wireless or wired Ethernet LAN. Ports grouped along the right of the chassis are VGA and HDMI video outputs, Ethernet jack, two USBs, and mic-in and headphone-out. Besides the optical drive, the left side houses another one USB, power jack, and a Kensington lock slot. A 6-in-1 card reader is located on the front lip of the laptop.

The battery inside the notebook is a Li-Ion 48Wh 6-Cell unit. There’s no info on battery life, but judging from the specifications, it’s probably above four hours with light use.

Outwardly, it’s apparent that Toshiba’s C55-A5300 is an affordable machine, since the chassis is done up in black plastics. However, it’s nice to see that the surfaces are not glossy, so it’ll be easy to keep the laptop smudge-free. Notebook’s weight of 5.4 pounds is an average one.  It is fairly thick with its 1.4″ profile, but it isn’t bulky when compared to similar low-cost systems. Exceptions are the Asus X502CA series with no optical drive.

Overall, this model isn’t so fast and well equipped, but the exceptional 280-dollar price tag easily outweighs the bad sides of it. For under $300, the C55-A5300 is probably the best choice and is generally a smart buy for anyone shopping on a tight budget. But, if you have $70 more you can go for a laptop with the faster Intel Core i3 CPU, ensuring work with no lags. Examples are the HP 2000-2D11DX and Asus X501A-SI30403X. 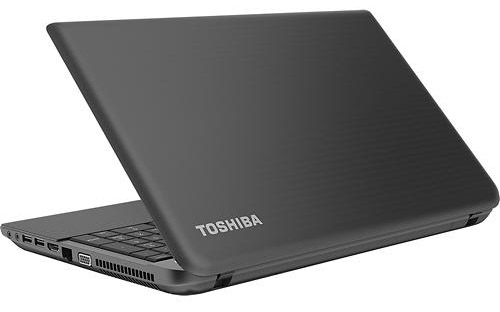