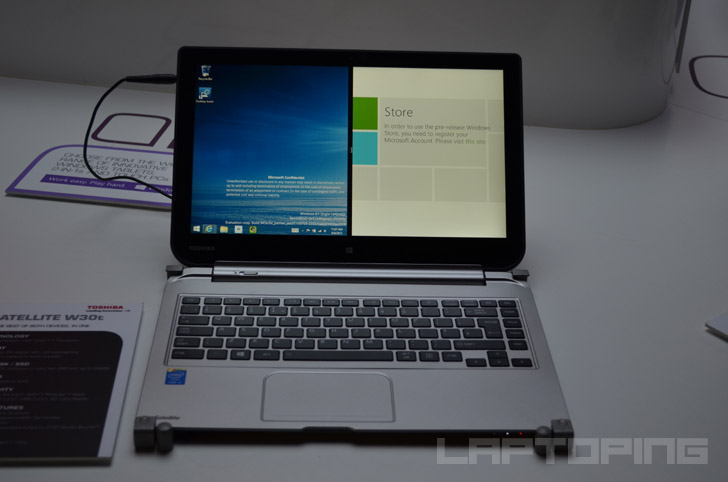 The Toshiba Satellite Click W30t and W30Dt are laptop / tablet hybrid PCs sporting 13.3-inch displays and detachable keyboards. The W30t configurations all feature the Intel Core-series processors, whereas the W30Dt comes with the AMD A4-series chips. They are both mid-range Windows 8.1 machines in terms of internal component specifications and screen resolution and therefore won’t be priced high. They’ll start at $600 in the US and slightly more than 600 EUR in Europe, which are affordable prices for a hybrid PC.

When you detach the tablet part from the keyboard dock by switching a dedicated button on the hinge for that purpose, you hold in hands a fairly bulky slate in comparison to usual 10-inch Windows tablets. The W30t / W30Dt tablet weighs about 2.9 pounds while its keyboard adds 2.4 pounds more to the overall weight. That’s a total of 5.3 pounds, which is a weight of the average 15.6-inch laptop. Thickness is also fairly big for a tablet. We have no exact dimensions, but the slate itself appears to be about 0.7″ thick, while the keyboard part is about 30% thinner.

However, let’s not forget that with the 13.3″ diagonal the Toshiba Click will be one of the largest screen tablets on the market and that the whole device has dual batteries. In addition, the laptop-class components inside it also need grater space than usually underpowered tablet-class ones. With the 4th Generation Intel Core processors, owners of the W30t will have ability not only to consume multimedia and do day-to-day tasks, but also create and edit multimedia content in Windows and even play PC games on low graphics settings thanks to the newer Intel HD-series graphics. The AMD A4 processors in the W30Dt aren’t so powerful, but they’re still good for routine tasks and ensure compatibility with x86 Windows applications. On the positive side, AMD’s computing tech enables fanless design of the W30Dt, so that model won’t have cooling fans and fan grilles as opposed to the W30t. The Toshiba Satellite Click’s CPUs are accompanied by 4GB of RAM memory and a 500GB hard drive. For SSD lovers, Toshiba will optionally provide a 256GB SSD. Overall, you’ll have laptop-like computing speed and ample storage space in a tablet form factor.

The main trade-off for the relatively low price of the machine appears to be the screen resolution. It’s 1366-by-768 pixels, whereas some other laptops and tablets on the market feature 1920×1080 or even 3200×1800, like the Lenovo Yoga 2 Pro. Luckily, the W30t/W30Dt is equipped with IPS screen technology, which enables good picture from almost whole viewing angle range and the display is really bright. Speaking of display viewing, it’s a good thing that you can adjust the screen angle when the tablet is attached to the dock, so you are not stuck with just one position like on some hybrids.

Regarding the dock, besides the full-size keyboard it includes a USB 3.0 port and a secondary battery. Presses of the keyboard keys feel nice, although the key travel could have been longer. Also, left and right sides of the keys could have been a bit longer. We have no complaints on the trackpad’s precision, but some users won’t like absence of physical click keys.

According to Toshiba, the 2-cell battery in the tablet enables it to run up to five hours on a single charge and the battery in the dock has the same capacity, so you can get up to 10 hours with both units combined. However, since different configurations will have processors with different power consumption, the battery life will vary to some extent, depending on model.

It’s worth noting that both the tablet and the keyboard have stereo speakers built-in. In the classic laptop mode, sound is reproduced via the speakers in the dock and when you detach the tablet the sound transfers to its speakers. However, you can’t have sound on all four speakers simultaneously.

For video chats, there’s a built-in frontal camera with microphone, while for connection to the outside world the PC has Wi-Fi connection. It also sports Bluetooth.

Design-wise, the Toshiba Satellite Click W30t / W30Dt, is a nice looking machine, with silver aluminum chassis. It could have been thinner for a more elegant look, but we’ve already mentioned that this isn’t an ordinary tablet. It’s rather a full-blown PC which can operate as a slate.

The computer will start shipping to customers after the Windows 8.1 launch in late October.

Update: The tablet/laptop is available now as the W35Dt-A3300 configuration with the AMD A4 and there’s also a new HP Split X2 13-M110DX model with the much faster Intel Core Haswell.