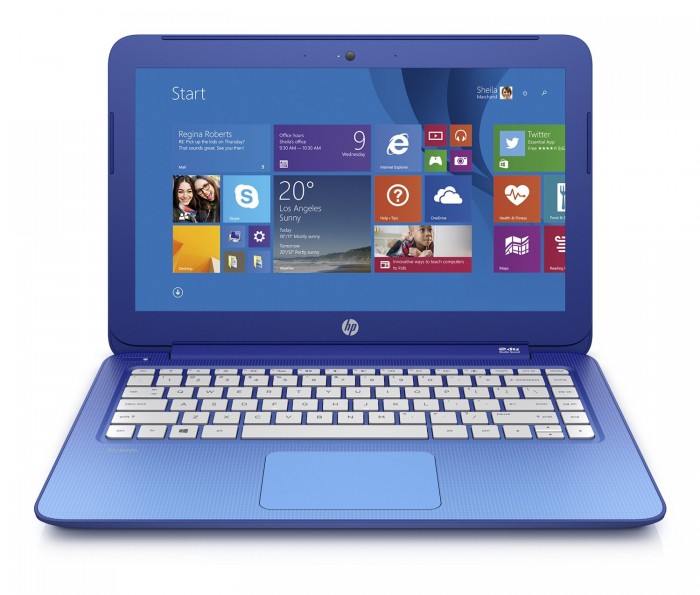 For sure, the Stream 13 is just another budget-class machine in terms of specs and features. It has the basic Intel Celeron N2840 dual-core processor, 2GB of RAM, 32GB of eMMC-based solid state storage, and 1366×768-pixel resolution. However, the 13.3-inch laptops are traditionally more expensive than similarly equipped 15.6-inchers. The majority of 13.3″ models usually belong to some of the pricey business-class or premium consumer notebook series. The size is well suited for road warriors / mobile professionals, but with this release it will become a part of the mainstream segment. It’s apparently targeted at the budget-savvy customers who find the 15.6-inch notebooks too bulky and 11.6-inchers to small, with cramped keyboards. The 1366×768 display resolution is a standard one among low-cost notebooks including both 15.6″ and 11.6″ models, so with the Stream 13 users are actually getting the same amount of screen real estate in terms of available space on the Desktop, in apps, and in user interfaces in general.

The main trade-off of HP’s Stream 13 are internal components. The Celeron N2840 isn’t necessarily a bad CPU. In fact, it can handle the daily chores quite effortlessly as you can see in this review, but 2GB of RAM instead of at least 4GB can limit multitasking capability of the notebook quite a lot. Additionally, only 32GB of internal storage can cause another set of troubles, primarily because you can’t install apps from the Windows Store anywhere else. Regular files and other programs can be put on a memory card, since the notebook has a card reader built-in. To make these issues worse, RAM and storage are not upgradeable.

On the positive side, the laptop comes bundled with a 1-year subscription for Microsoft Office 365 Personal suite. It’s a common feature on the cheap Windows tablets, but a rarity among Windows notebooks. Currently, it’s available only with a purchase of the Stream 13, and 200-dollar 11.6-inch Stream 11 and Asus X205TA. The Stream 14 is also available. It’s around $300, without the Office subscription.

For a full specs sheet of the HP Stream 13, you can visit this page.