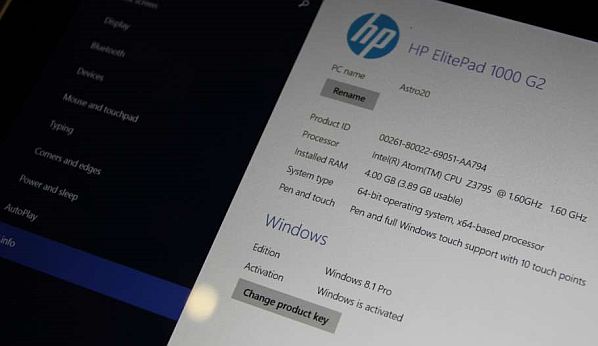 The Intel Atom Z3795 processor for tablets made its debut last month when HP unveiled its business-use ElitePad 1000 and ProPad 600 models. They both include the quad-core Z3795, which is the first processor from the Bay Trail family to be used with 64-bit version of Windows. Previously, computer makers had been offering only 32-bit Windows on tablets with Bay Trail chips, the older Z3740 and Z3770(D), although they support 64-bit computing. (Thanks to Jay who pointed out in a comment that the Z3795 isn’t the first 64-bit Bay Trail CPU, as we previously reported. The Z3795, Z3740, and Z3770(D) are all 64-bit processors).

Going from 32-bit to 64-bit Windows on the Bay Trail tablets enables use of 4GB of RAM. The Win 32-bit / Atom Z3740 and Z3770(D) based tablets on the market have only 2GB of RAM and therefore aren’t suitable for any heavier multitasking. To remind you, maximum RAM supported by 32-bit operating systems and processors in general is about 3GB.

According to the first benchmark of the Z3795 on the HP ElitePad 1000 G2 with 64-bit Windows 8.1, the CPU/OS combination doesn’t bring performance improvements. A result from the Geekbench benchmark database shows similar results to those of the Atom Z3770 with 32-bit Windows 8.1 in the HP Omni 10 tablet. In some tasks the Z3795 is even slower although it has a higher base clock speed of 1.6GHz. Maximal clock, in the so called burst mode, is up to 2.39GHz on both chips and they both have 2MB cache and Intel HD integrated graphics. On the other side, the Z3795 & 64-bit Windows shine in Geekbench’s memory performance test, noticeably outpacing the Z3770 on 32-bit OS.

Anyway, the new Atom, as same as the older one, is quite good for routine daily tasks an average user might throw at it, such as web browsing, multimedia playback including 1080p videos, and office productivity.