In January 2008, Intel will launch “Santa Rosa Refresh”, an update to its current Centrino laptop platform. The Refresh will include “Penryn”, the mobile processor produced using 45nm technology, and improved graphics capabilities, the chip maker announced during the ongoing Intel Developer Forum 2007 in San Francisco. 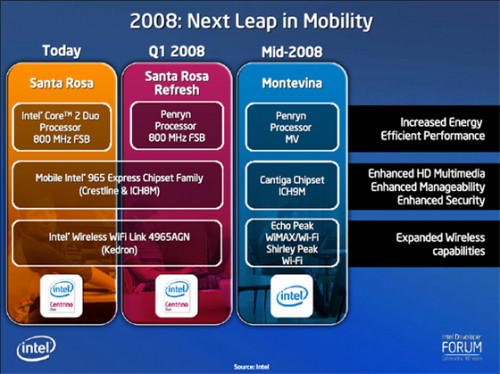 During the IDF 2007, Intel also showed its “Montevina” notebook platform, which is expected to be released in mid-2008. Along with the “Penryn” CPU and the new chipset supporting DDR3 memory, “Montevina” will offer the option of integrated WiMAX wireless technology. The next-generation platform will also incorporate HD-DVD/Blu-ray support, as well as enhanced data manageability and security features. According to Intel, “Montevina” has approximately 40 percent smaller components than those in current “Santa Rosa” platform, so we can expect smaller and lighter Centrino-based notebooks to hit the market after the “Montevina’s” launch.