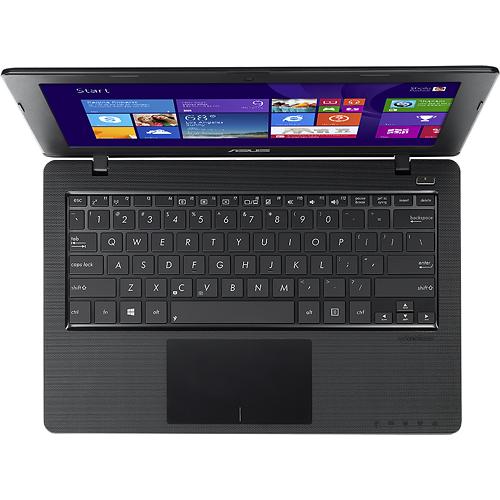 Hardware update of one of the best selling Windows laptops last holiday season has arrived. The Asus X200MA-RCLT07 inexpensive ultraportable still offers the same form factor and touchcreen functionality as its X200CA 11.6-inch precursors. But, Asus has replaced the aging Intel Celeron 1007U “Ivy Bridge” processor from 2012 with the latest Celeron N2815 “Bay Trail” chip. The update doesn’t necessarily mean better performance. In fact, the N2815 is slower than the 1007U. Their PassMark benchmark scores are 950 and 1,450, respectively. Anyway, the “Bay Trail” is still a capable CPU for daily web surfing and office duties, as well as 1080 video playback. It brings noticeably lower power consumption: 7.5W versus 17W. We have no info on the battery life comparison between the X200MA-RCLT07 and X200CA models. It’s clear the former is way ahead in terms of power efficiency.

Any serious game rendering on this laptop is out of question, since the included Intel HD integrated graphics is fairly limited. The GPU is primarily meant to manage the display without consuming much battery juice. Lighter 3D games such as Minecraft will be able to run, but on lowered settings. On the other hand, on-demanding 2D titles like Angry Birds will have no issues on the Intel HD.

In other aspects, these plastics-cladded mini-laptops with black textured finish appear to be identical. They have 1366×768 screen resolutions, chiclet keyboards, stereo speakers, webcams, three USBs with fast 3.0 speed standard on one of them, and HDMI and VGA video output connectors. The machines weigh 3 pounds. They’re 1.2″ thick at the thickest point.

The X200MA-RCLT07 has 4 Gigabytes of RAM memory, which is enough for multitasking without a glitch. The hard drive is 500GB large, which is a fair capacity for the given price. As expected, the model has no built-in DVD burner. If you want that feature in a budget laptop, you should look for some of the larger 15.6-inch models. They’ll also provide you with a separate numeric pad on the keyboard, which is important for large amounts of number inputs. However, the keyboard is fairly large for comfortable typing and is accompanied by a fairly big multitouch trackpad.

Overall, the X200MA-RCLT07 is well-rounded small laptop for a cheap price. There are many other systems in the same 11.6-inch form factor available (you can find them by clicking here). However, if you want something affordable, the Asus appears to be the best choice among similar offers.

Specifications of the Asus X200MA-RCLT07

Here are the specs of the Asus X200MA-RCLT07 with descriptions of its features. For comparison against other laptops, you can use the "Compare Specs" button.