The HP 14-an013nr is a very affordable 14-inch notebook with above average specs for its price of around $220. The 14-an013nr is indeed a budget-class laptop with lower-mid-range performance, plastic casing, and non-backlit keyboard. But, it sports Full HD display resolution and IPS LCD technology, features that are usually reserved for expensive high-end models.

Besides with its great pixel density for a sharper picture and IPS-powered wide viewing angles, the HP 14-an013nr stands out from the crowd of low-priced alternatives with its computing potential. While the common $200 laptop usually features an Intel Celeron dual-core processor with PassMark benchmark score of around 1,000 points, the included AMD E2-7110 scores around 2,150 in the same test. This solid score of the CPU combined with decently-sized 4GB of RAM memory means you’ll be able to comfortably do all your common computing home and office tasks without slowdowns. Of course, for more demanding users like audio, video, and photo professionals, recommended are more powerful laptops with Intel Core i-series and comparable AMD processors. As expected, this model isn’t a gaming laptop. The Radeon R2 graphics processor integrated in the main CPU is good enough only for basic gaming. It doesn’t support many of the latest game titles, but you’ll be able to play some older and non-demanding games.

An area where the 14-an013nr doesn’t shine is storage. The laptop has only 32 Gigabytes of internal data storage space. You’ll probably want to expand it with an SD media card via laptop’s media card slot and use online “cloud” storage. As a side note, some websites list this laptop with a 32GB hard drive. In reality, the 14-an013nr includes Flash memory based eMMC storage, which is somewhat faster than the usual laptop hard drives.

For sound reproduction, there are stereo speakers, while video conferencing can be done via the built-in HD web camera.

Another good selling point of HP’s extremely cheap 14-incher are its networking and connectivity features. Unlike many other similar laptops with limited number of ports and Internet connection options, the HP 14-an013nr includes a full set of them. There are three USB full-size ports – one is USB 3.0 while the rest run on 2.0 speed. If you want to hook up an external display to the machine, you have two options – HDMI video output and older VGA out. Networking can be done either via built-in Wi-Fi with support for the latest 802.11AC standard or via an old-school Ethernet LAN port.

HP estimates the notebook can run autonomously up to “5 hours and 15 minutes” on a single battery charge. It’s a quite decent battery life for a 14″ laptop with a medium-sized 31 WHr battery. We applaud HP for enabling easy battery replacement, since it isn’t sealed inside the chassis. Instead it’s held by the traditional mechanism with latches, so user can easily replace the battery.

Portability is also good for the given screen size. This model weighs in at 3.9 pounds. The profile is 0.9″ thick. 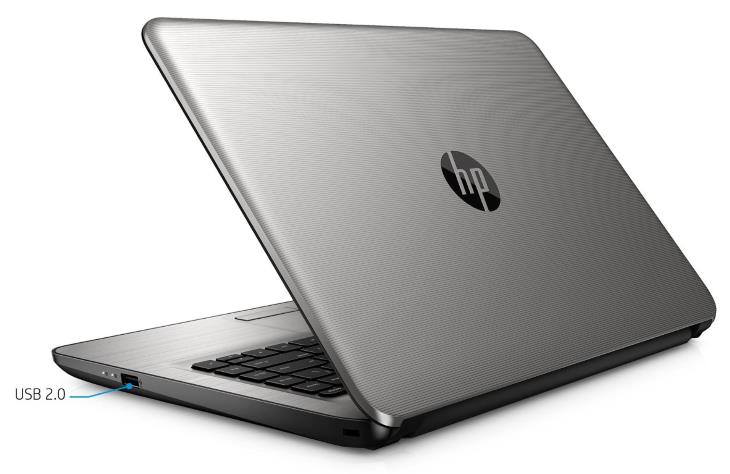 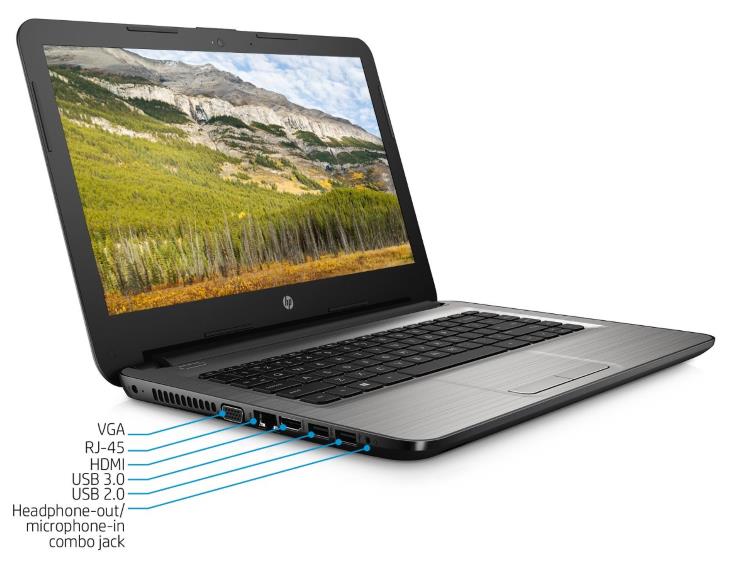 Specifications of the HP 14-an013nr

Here are the specs of the HP 14-an013nr with descriptions of its features. For comparison against other laptops, you can use the "Compare Specs" button.