The AMD A8-7410, just like its 6410 precursor, is a lower-mid range notebook processor. Both chips deliver very similar performance, with the A8-7410 being only a tad faster. In the real world use, it means smooth operation during day-to-day home and office tasks, but for heavier stuff like multimedia production, recommended are faster chips like the AMD A10 or Intel’s Core i5 and i7 series, especially quad-core i7. True, the A8-7410 also has four cores, but performance-wise it is comparable to the more popular dual-core Intel Core i3 series. Just like the majority of mainstream laptop CPUs, the A8-7410 consumes 15 Watts of power. 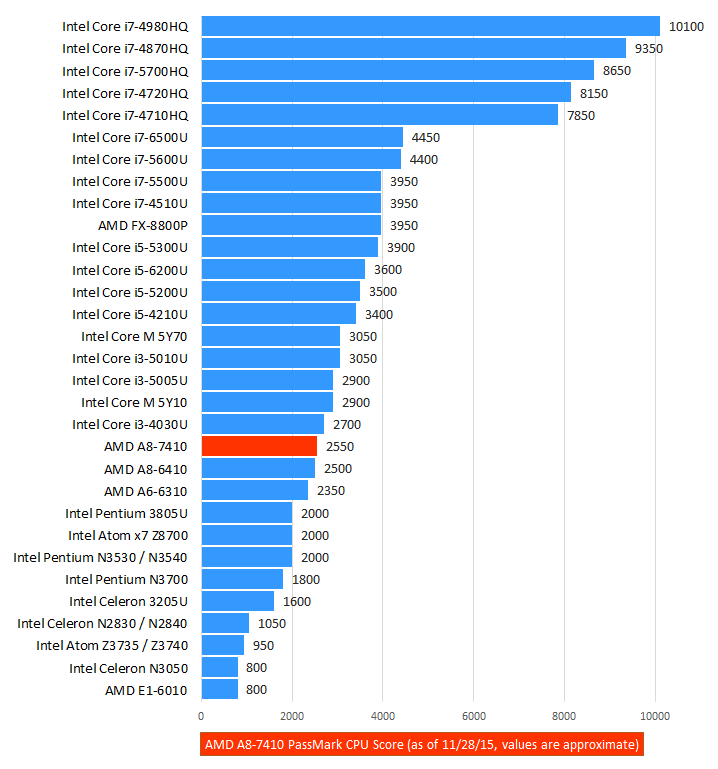 The A8 processor has the Radeon R5 integrated graphics, with similar performance to the Intel HD 5500 / 520 series found in the current Intel Core chips. This means it can run decently smooth light and casual games like League of Legends and Minecraft, but also some more demanding titles on the lowest graphics settings.

As one of it greatest benefits, the A8-7410 is a budget-friendly chip. You can usually find it in sub-$500 mainstream notebooks.