The AMD E1-6010 is a very basic processor for inexpensive laptops. Featuring two cores, a clock speed of only 1.35GHz, and 1MB of cache, the E1-6010 “Beema” APU can’t offer anything but entry-level performance. In fact, it is one of the slowest notebook-use CPUs on the market today, as you can see in the PassMark benchmark comparison chart.

However, it can be used for the daily chores and provides an acceptable experience if you don’t do anything too complex on it and don’t multitask too much. Just like the competing Intel Celeron N2820/N2830/N2840 series CPUs we reviewed recently.

In the video below, you can see what doing everyday light tasks on a laptop with the E1-6010 looks like. It’s a Dell Inspiron 3541 series configuration with 4GB of RAM and a mechanical hard drive. Scrolling through web pages is quite smooth, as well as switching between a couple of opened apps – YouTube video in Internet explorer, a text document in WordPad, and a 5MP image in Paint.net. YouTube 1080p-resolution videos play without a glitch. The aforementioned Intel Celerons provide a bit snappier experience, but overall the E1-6010 has a real life performance very close to them.

As for gaming, the Radeon R2 is also similar to the Intel HD integrated graphics used in the Celeron chips. This means playable frame rates only in less demanding games on lower graphics settings and low 720p resolution. Under these conditions, our test showed playable are League of Legends, Counter Strike: Global Offensive, and Team Fortress 2, all running at about 25 fps.

However, in some titles the E1-6010 / Radeon R2 performed unexpectedly bad. Among the tested games, in Dota 2 and Minecraft in particular. Due to some reason, the frame rates on the lowest settings and 720p resolution were around 10fps in Dota 2 and around 15 fps in Minecraft most of the time. It appears the CPU clock speed of 1.35GHz throttles the system in these games. On the other hand, Minecraft and Dota 2 are playable on the Celeron CPUs at above 20 fps.

Performance of the E1-6010 is sacrificed big time in interest of lower costs, better power efficiency, and lower heat. The processor consumes 10 Watts, which is below consumption of the popular Intel Core series chips with 15W or greater TDP, but still above the Celeron N-series with 7.5W TDP. The E1 runs quite cool. In the tested notebook, the CPU temperatures were between 40 degrees Celsius on idle and up to 60 degrees under heavy stress. The laptop itself stayed almost cold most of the time with fans blowing only occasionally on low and quiet rotating speeds.

All in all, the E1-6010 review shows us that even the cheapest notebooks with slowest CPUs on the current market are usable machines, which perform the daily web, office, and multimedia tasks at acceptable speeds and even run some lighter games. 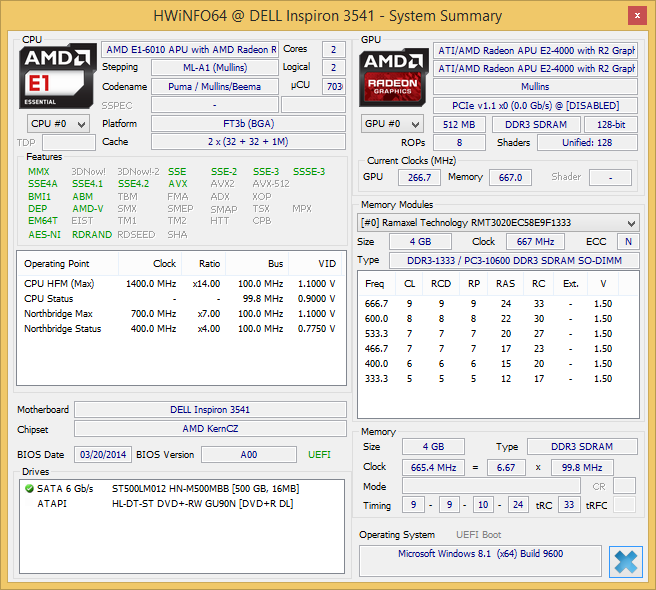 Update: The E1-6015 is an updated version of the same chip. The only difference between the 6010 and 6015 are their clock speeds of 1.35 and 1.4 MHz, respectively, without any noticeable impact on performance.

Note: The benchmark scores of the listed processors are averages measured across various devices with these processors. The scores and real-world performance of the AMD E1-6010 and compared CPUs may vary depending on the notebooks' other components, settings, cooling, and other factors. However, the benchmark results are good indicators of the processors' performance.