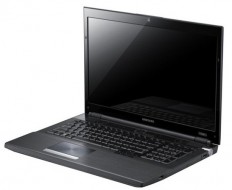 We assume the system has some sort of switchable dedicated / integrated (on the CPU) graphics, since it has a dedicated switch for various operating modes, such as power saving and gaming.

Unlike the most of newer laptops, the Samsung Series 7 doesn’t have a chiclet keyboard. Instead, it sports old notebook style keys. W, A, S and D keys, used for navigation in games, are highlighted and the keyboard has backlight.

The NP700G7A-S02DE will hit the European market next month, with a price tag of 1,800 Euros. There’s no word on pricing and availability for the US market. We’ve tried to find info on NP700G7A-S02US (that could be the US model name), but there’s nothing about it on the Net.