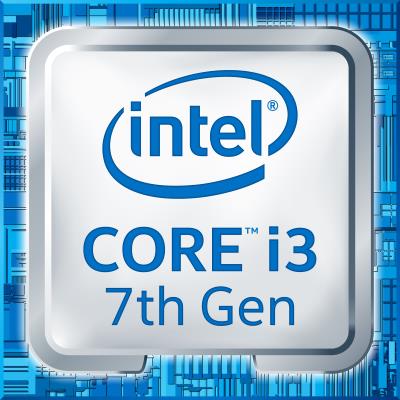 The 7th Generation Intel Core i3-7100U is a processor for mainstream laptops. It’s a lower-mid-tier chip, ranked a level below the widely used i5-7200U from the same 7th Gen U “Kaby Lake” family.

The 2.4GHz i3-7100U is slower than its i5 counterpart in benchmarks, primarily due to a lower-clock speed, a lack of Tuboboost technology, and smaller cache size of 3MB instead of 4MB. But, lower performance in synthetic benchmarks doesn’t necessarily mean bad user experience in the real-life scenarios. The i3-7100U can serve perfectly well for the daily computing chores, such as web surfing, Office document editing, some casual gaming, and media playback, including high resolution 4K videos. Regarding its 6th Gen i3-6100U precursor, advantages of the newer 7th Gen version is minimal. Cheaper Intel Pentium processors are adequate solutions for these tasks, too, but they have noticeably slower Intel HD graphics, as opposed to the HD 620 used in the 7th Gen i3, i5 and i7. As for the Intel Core M series chips (m3, m5, and m7), they also perform similar to the i3 in day-to-day tasks while consuming less power and generating less heat. But they are aimed at use in ultra-thin and fanless notebooks, which aren’t as affordable as Core i3-based machines.

Yes, pricing is a good selling point of the i3-7100U processor. The i3 enables lower laptop price tags than on notebooks with the i5 and i7 chips, while retaining almost the same performance in everyday computing activities. Getting a laptop with a more powerful (and more expensive) processor is a good investment only if you do some CPU-intensive tasks like hard-core gaming, video and audio production, or photography editing.

Note: The benchmark scores of the listed processors are averages measured across various devices with these processors. The scores and real-world performance of the Intel Core i3-7100U and compared CPUs may vary depending on the notebooks' other components, settings, cooling, and other factors. However, the benchmark results are good indicators of the processors' performance.

Specifications of the Intel Core i3-7100U

Here are the most important specs of the Intel Core i3-7100U: