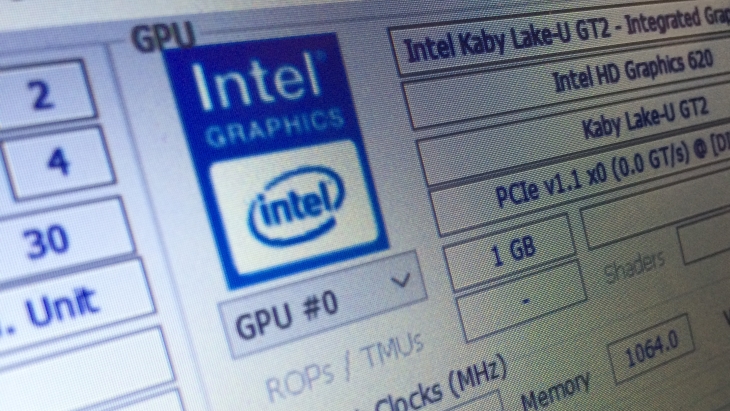 The Intel HD 620 is an integrated graphics processor. It is used in the widely adopted 7th Generation Intel Core “Kaby Lake” laptop processor family. Currently the most popular CPU with the Intel HD 620 is the mid-range 7th Gen Core i5-7200U, which we used for this review. The tested i5-7200U / HD 620-based Lenovo IdeaPad 310 laptop also includes 8GB of RAM in dual-channel mode (4GB x 2), and a 1-Terabyte 5,400rpm hard drive with Windows 10 Home operating system and Intel HD drivers (ver. 21.20.16.4550) installed on it. Please note that gaming performance of laptops with the HD 620 and single-channel RAM (like 8GB x 1 instead of 4GB x 2) will be noticeably lower than presented in this review. Also, different processor models like the 7th Gen Intel Core i3-7100U, i5-7200U and i7-7500U, different thermal designs of notebooks, BIOS settings, and other factors can influence performance of the Intel HD 620 and other integrated graphics processors. But generally, not as much as dual- or single-channel RAM factor.

With specifications of the 7th Gen Intel i5-7200U with HD 620 graphics being very similar to specs of the previous-generation i5-6200U / HD 520, the latest CPU / GPU chip doesn’t bring any significant performance boost over its precursor. In a greater scheme of things, the 620 is obviously a low-end graphics solution. It’s however capable of rendering many of the most popular game titles quite decently as you will see in the rest of this review.

Note: All gameplays in the videos below were recorded with separate video capture hardware, so recording didn’t influence shown performance.

In League of Legends you can max out all graphics settings on Full HD 1920×1080 resolution and still get flawless gameplay rendering with frame rates of around 75 fps, even in busy scenes. Therefore, the Intel HD 620 is an excellent solution for LoL.

DOTA 2 is a similar, but more hardware-demanding MMORPG game title. You’ll have excellent frame rates if you use a low resolution like 1280-by-720 pixels and low (“Fastest”) settings – mostly between 60 and 80 fps. Optionally, you can increase detail settings a notch and still have playable DOTA 2. Our test with that settings shows fps values of around 25 – 35. The good news is that increasing resolution to Full HD 1920×1080 while keeping everything else the same only slightly decreases smoothness.

The Intel HD 620 appears to be a no-brainer GPU choice for Minecraft. Frame rates were above 100 fps most of the time on high (“Fancy”) video settings with default render distance of 12 chunks.

Counter Strike: Global Offensive is among the most popular first person shooter games. It isn’t computing intensive by modern AAA game standards. The Intel HD 620 graphics can crunch it easily on 1280×720 pixels and medium or high settings, with around 65 and 55 fps respectively during most scenes. Or, you can put it for instance on 1920×1080 pixels and medium settings for about 45 fps most of the time.

Call of Duty: Advanced Warfare first person shooter taxes hardware heavier than the games listed above. It’s playable on the Intel HD 620. If you put CoD: AW on minimal detail settings and 720p resolution you’ll get 30 – 60 fps, depending on a scene.

The ubiquitous Grand Theft Auto – GTA 5 is an overly heavy task for the Intel HD 620. With resolution set to 720p, DirectX setting on DX11, and the rest of graphics settings on minimum, frame rates in the built-in GTA 5 benchmark go between 20 and 25 fps with occasional drops below 20 fps. Overall, a choppy gaming experience. In this GTA 5 case, Choosing DirectX 10 instead of 11 only reduces graphics quality without improving rendering smoothness.

FIFA 2017 on the Intel HD 620 isn’t good either, but the game is playable on the lowest settings and 1280×720. During active parts of football actions which are the main part of the game, frame rates are around 30 fps. In scenes such as goal celebrations and replays, frame rates occasionally drop to only 10 fps.

The old but still very popular Elder Scrolls V: Skyrim runs flawlessly on 1280×720 / lowest settings, with fps of around 60. Increasing settings a step noticeably degrades smoothness, with a drop to around 35 fps. On 1920×1080 pixels and lowest settings, fps values mostly gravitate toward 40-45.

Note: The benchmark scores of the listed graphics processors are averages measured across various devices with these processors. The scores and real-world performance of the Intel HD 620 and compared GPUs may vary depending on the notebooks' other components, settings, cooling, and other factors (especially single-channel vs faster dual-channel RAM and speed of the main processor). However, the benchmark results, as well as gameplay videos, are good indicators of the graphics processors' performance.

Specifications of the Intel HD 620

Here are the most important specs of the Intel HD 620: