The 8th Generation Intel Core i3-8130U is a mid-range dual-core laptop processor. The previous generation Core i3 chips are lower-mid-range CPUs and the i3-8130U is noticeably faster than them, so it is a mid-tier model. This advancement is enabled primarily with help of Intel’s TurboBoost technology, which is lacking on the 7th Gen and older i3 counterparts. TurboBoost allows big clock speed bursts – in this case from default 2.2 GHz up to 3.4GHz, in situations when a computing task requires that. 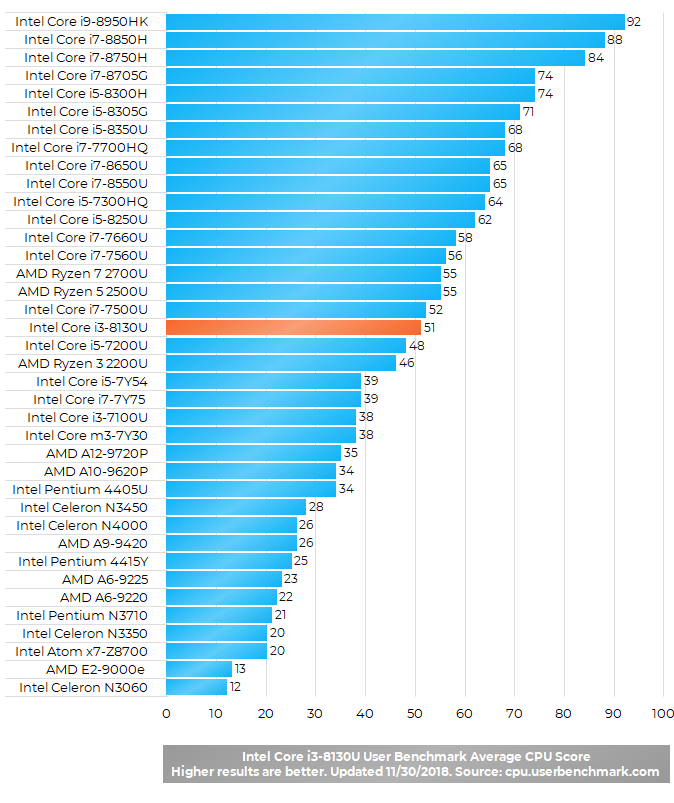 Advantage of the Intel Core i3-8130U over its i3-7100U precursor, as well as other 7th Gen CPUs, is very visible in benchmark results. On the other hand, the i3-8130U noticeably lags behind other 8th Gen Intel Core chips, such as the widely used i5-8250U. That’s primarily because the i5 has four processing cores as opposed to i3’s two cores.

As for real-life use, the Intel Core i3-8130U is an excellent solution for the day-to-day computing tasks – web browsing, work in MS Office and other productivity software, or media playback. Investing in faster 8th Gen i5 and i7 makes sense if you do demanding tasks like video or photo editing on daily basis. In aforementioned routine daily tasks difference between the i3, i5, and i7 is barely noticeable.

As for gaming, the i3-8130U with its Intel UHD 620 integrated graphics is capable of running only light games. But, many of the most popular titles, such as League of Legends or Minecraft, aren’t demanding and they can run on the UHD 620 quite smoothly.

Note: The benchmark scores of the listed processors are averages measured across various devices with these processors. The scores and real-world performance of the Intel Core i3-8130U and compared CPUs may vary depending on the notebooks' other components, settings, cooling, and other factors. However, the benchmark results are good indicators of the processors' performance.

Specifications of the Intel Core i3-8130U

Here are the most important specs of the Intel Core i3-8130U: