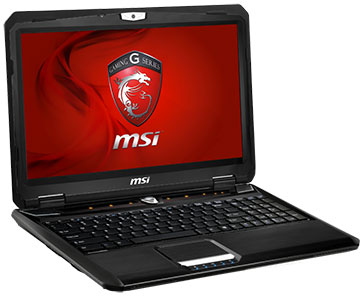 These mobile gaming rigs come with up to 16GB of RAM memory, a hard drive plus solid state drive storage, and an optical drive.

Regarding gaming performance, the AMD Radeon HD R9-M290X will be among the fastest laptop video cards this year. This should mean a flawless gameplay in all modern games at 1080p resolution. Reviews of R9 M29X are not available yet, but MSI claims the 2GB version of the card included in the Destroyer GX60 and GX70 can achieve 32 frames per second (FPS) even when at full HD and using Ultra settings in Battlefield 4 game. By the way, a free copy of BF 4 is provided for all buyers of the GX60 and GX70.

For graphics tasks which are not intensive, the systems will use the more energy efficient AMD Radeon HD 8650G graphics integrated in the A10-5750M CPU. The CPU itself is the fastest laptop-use AMD part, but it’s not as powerful as the gaming-class Intel Core i7 quad-core chips. For comparison, the A10 scores 3,300 points in the PassMark CPU benchmark, while the commonly used i7-4800MQ racks in 8,500 points. Therefore, the A10-5750M is closer to the dual-core Intel i5-4200M with about 4,100 points than to the quad-core i7.

While we are at the visuals, let’s also mention capability of the Destroyers to output video on up to three external monitors, thanks to Eyefinity technology and HDMI, Mini Display Port, and VGA output ports.

Important on-body features are the gaming-optimized SteelSeries keyboard, with improved durability and responsiveness, Killer-branded Ethernet LAN port for reduced latency when playing games via a network, a gold-plated earphone jack for improved sound quality on headphones, and a total of five USB ports.

Alongside the screen diagonals, the only big difference between the two machines are of course dimensions and weight. The GX60 Destroyer is 1.8″ thick and weighs 7.6 pounds, while the GX70 measures 2.1″ thick and 8.5 pounds heavy.

Pricing and exact availability dates are unknown at the time of this writing.