The Nokia Lumia 2520 tablet with Windows RT 8.1 operating system, a 10.1-inch display, quad-core Snapdragon 800 processor, 4G LTE connectivity, and 32GB of internal storage is going on sale today (Nov 22nd) in the US. Offered via AT&T and Verizon cellural carriers, it’s $499 off contract or $399 with 2-year data plan agreements. AT&T customers also have a choice to get it for $199 if they purchase it bundled with Lumia 925, Lumia 1020, or Lumia 1520 Windows phones. With the given specifications and pricing, the same slate form factor with optional keyboard covers, and RT version of Windows, it’s obvious that the Nokia Lumia 2520 is a direct competitor of the Microsoft’s own Surface 2, priced at $499 for the 32GB version. However, if you take a look at the specs sheets more closely, you’ll find out many differences between them. 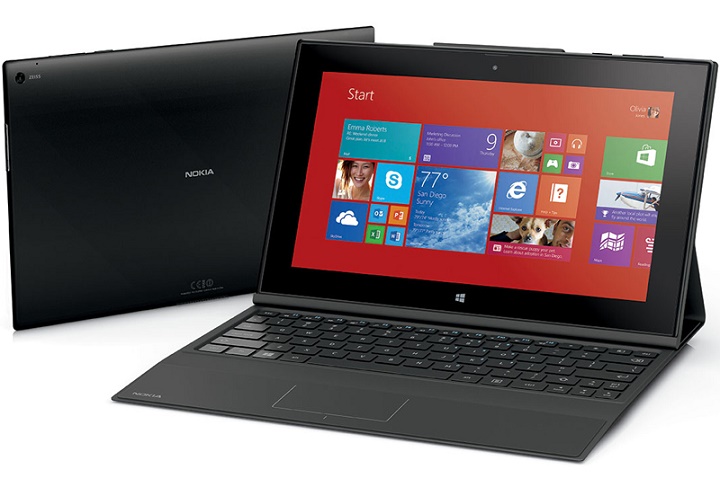 First of all, the Nokia has a slightly smaller screen of 10.1″ versus Surface’s 10.6″, while both having the same 1080p Full HD display resolution and IPS screen technology for wide viewing angles. Nokia highlights “the best outdoor readability” of their slate which has a screen brightness of 665 nits. For comparison, Microsoft’s tablet has still excellent 400 nits. Together with 4G LTE mobile broadband built-in, the outdoor-friendly screen makes the 2520 a better companion for use on-the-go, with an exception of the slightly shorter battery life (more about it latter).

Physically, the devices have similar dimensions but a major differentiator is the kickstand which is present on the Surface and missing on the Lumia. That means that you can keep the Lumia on your desk or lap in vertical position only when you pair it with the separately sold keyboard cover. The Lumia 2520 and Surface 2 have the same thinness of 0.35″. The former is a tad lighter than the latter. They measure 1.36 and 1.49 pounds, respectively. The surface is made of better material. It’s magnesium-alloy, while the Nokia is made of poly-carbonate plastics. Potential 2520 buyers have multiple chassis finishes to choose from: black and blue are matte, while white and red are glossy. But, not all choices are available at the time of this writing. AT&T is currently selling only the black one. On Verizon, the black is available in stores, whereas customers purchasing online can choose between black or red options. 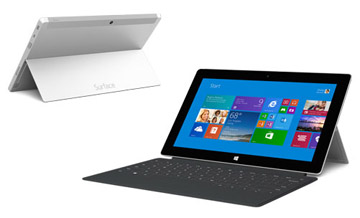 While we are at the keyboard accessories, let’s mention that the keyboard case for the Nokia 2520, officially Power Keyboard, is only optional and isn’t available yet, although the tablet maker announced it’ll be available at the same time as the slate itself. We assume it will arrive soon and it’s certain that it’ll have a $149 price tag. Besides the keyboard with keys similar to Surface’s Type Cover (2), Nokia’s Power Keyboard will have a built-in additional battery for extra battery life and two USB ports. On the other side, the basic Surface Type 2 and Touch 2 covers don’t have these features, but the upcoming 199-dollar Power Cover will have a built-in battery.

According to Engadget’s review of the 2520 and the battery life test of the device itself (video looping off local storage, brightness set to 50%, WiFi turned on), it has a remarkably long run time, but still shorter than the Surface 2. It’s 13 hours and 28 minutes versus 14:22.

Cameras on tablets aren’t as important nor frequently used as on smartphones, but let’s note here the Lumia has an advanced 6.7-megapixel shooter (versus 5MP) with quality ZEISS optics and fast f/1.9 aperture on the back, whereas Microsoft has embedded a larger 3.5MP sensor on the front, up from 2MP. Comparisons of the cameras aren’t available at the time of this writing, but we strongly assume that Nokia wins on the rear side, while Microsoft is better on the front.

Also, we weren’t able to find any processor head-to-head benchmarks, but both quad-core Qualcomm Snapdragon 800 and Nvidia Tegra 4 chipsets are top-scorers in the mobile arena and provide flawless Windows RT experience.

An obvious advantage of the Nokia 2520 is presence of NFC (Near Field Communication) sensor for quick pairing and sharing with other NFC-enabled devices, as well as built-in GPS for navigation purposes.

On the software side, the devices have the same basis. It’s RT version of the latest Windows 8.1. RT means it’s made for computers with the power-efficient and mobility-optimized ARM processors. As a downside, Win RT and ARM chips don’t support the traditional x86 programs which work on the full Windows XP / 7 / 8(.1) and Intel and AMD processors, such as Adobe CS family, CAD engineering software, or game classics like Crysis. Therefore, the compared tablets rely on Metro-style apps (available on both RT and full Windows 8) and nativelly built-in Desktop-style programs like WordPad, MS Paint and others. Thankfully, these RT tablets come pre-installed free of charge with Microsoft’s Office Home and Student suite 2013 RT, including Word, Excel, PowerPoint, OneNote, and Outlook. RT Office has majority of features present on full x86 Office, but it lacks support for some advanced stuff like macros and add-ins. Even on the software front, Nokia offers a bit more than Microsoft. The Lumia comes pre-loaded with some of Nokia’s quite usable apps, like their own advanced Camera app, HERE Maps, Video Director editing software, StoryTeller, and Nokia music.

You can see a breakdown of specs, features, and differences in the comparison table below:

To conclude, here’s a pros (and cons) comparison of the Nokia Lumia 2520 and Microsoft Surface 2. Judging from the specifications, Nokia appears to offer more for the same price, although the Surface has it’s own advantages.