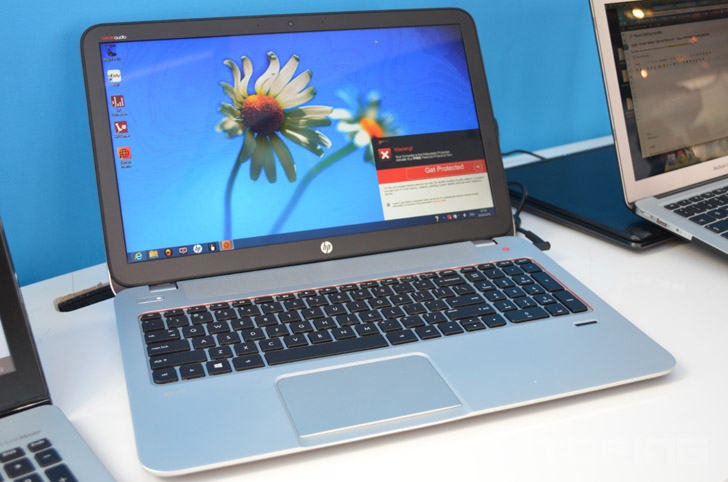 Since it’s from the Intel “Ivy Bridge” 2012 CPU family, the included Core i5-3230M is less power efficient than the comparable 4th Gen i5-4200M from the “Haswell” 2013 line. This basically means the 15-j011dx won’t have so long battery life as the counterparts with the i5-4200M, namely the configurable Envy 15t-j100 model. We have no info on battery life for the j011dx, whereas the j100 is claimed to have a run time of up to 9.5 hours. Both systems have the standard 6-cell batteries. Furthermore, the new Core i5 has a much better Intel HD 4600 integrated graphics processor (slightly better than the HD 4400), noticeably outperforming the previous HD 4000 series. Also, the i5-4200M is about 10 percent faster in terms of raw computing power than the i5-3230M (4,428 versus 3,998 PassMark CPU points). On the positive side, both chips are faster than the widely adopted ultra-low voltage i5-4200U for thin-and-light laptops, scoring 3,358 points.

Pricing is an interesting part of the story. The Envy 15-j011dx with 8GB of RAM and a 750GB hard drive is listed at $700 at Best Buy, while the 15t-j100 with the new i5 and same RAM / HDD capacities is $630 at the official HP site. However, the former will be a part of Best Buy’s Black Friday sales and will be priced at $500 during that event. So if you plan to get any of these laptops this month, it’s best to check out the prices on Black Friday on HP.com and available coupons and choose your system according to that.

As a stand out feature, the HP Envy 15, including the 15-j011dx, incorporates a quad-speaker system plus a subwoofer, so the Envy will produce much richer sound than the average consumer laptop. Audio is enhanced by Beats Audio technology.

On the other hand, the display delivers a mediocre 1,366-by-768 resolution, so if you want to watch movies in Full HD on your laptop you’ll have to choose some other system or configure the Envy 15t-j100 with 1080p display. It’ll cost you additional $50, which is not bad for such a big upgrade.

The HP Envy 15-j011dx doesn’t support touchscreen interaction with software, you you’ll have to rely only on the keyboard (with chiclet non-backlit keys) and the trackpad with integrated click buttons on the bottom of it.

This is an averagely-equipped Windows 8 notebook PC. It has no DVD burner, which has been omitted to lower the thickness and weight. On the sides of the 1.2″ thick laptop with aluminum palmrests and lid located are four USB 3.0 ports, HDMI video out, and a multi-in-one media card reader. The old VGA video output has been omitted, as well as Bluetooth, but the embedded fingerprint reader is a nice perk to have for extra security. Internet connectivity is provided via either Wireless-N or Ethernet LAN, while video chats are enabled through a 720p webcam.

Info on Best Buy’s website regarding the weight of the notebook is a bit confusing, since it says it measures only 4.4 pounds. The weight listed on the official HP website for the updated model is 5.6 pounds so the older version is probably much closer to that weight than 4.4 lbs.

Overall, the 15-j011dx for $700 isn’t such a good option, since HP.com offers newer technology in the same chassis for less money. However, if you get a change to grab it for $500 during the Black Friday sales, you’ll have a notebook worth the money you spent on it. But, before purchase don’t forget to compare it to deals offered directly from HP. There are also other similar alternatives worth consideration, such as the Toshiba Satellite P55-A5312 with a 1080p screen and keyboard backlight.